Values and Beliefs
The first, and perhaps most crucial, elements of culture we will discuss are its values and beliefs. Values are a culture’s standard for discerning what is good and just in society. Values are deeply embedded and critical for transmitting and teaching a culture’s beliefs. Beliefs are the tenets or convictions that people hold to be true. 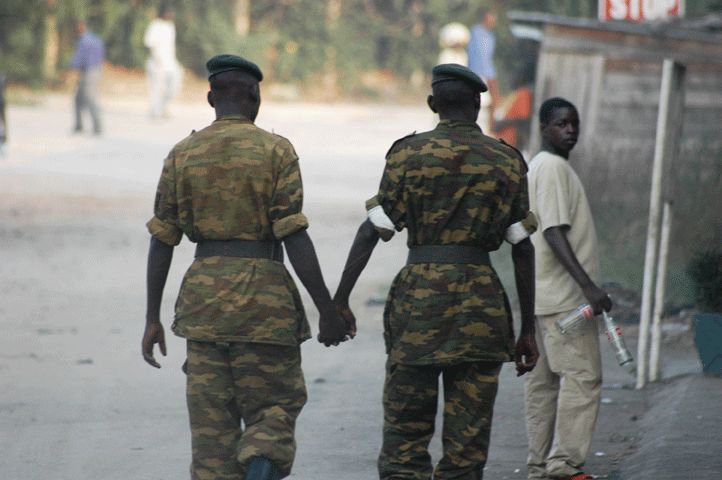 Figure 3.4 In many parts of Africa and the Middle East, it is considered normal for men to hold hands in friendship. How would Americans react to these two soldiers? (Photo courtesy of Geordie Mott/Wikimedia Commons)

Values help shape a society by suggesting what is good and bad, beautiful and ugly, sought or avoided. Consider the value that the United States places upon youth. Children represent innocence and purity, while a youthful adult appearance signifies sexuality. Shaped by this value, individuals spend millions of dollars each year on cosmetic products and surgeries to look young and beautiful. The United States also has an individualistic culture, meaning people place a high value on individuality and independence. In contrast, many other cultures are collectivist, meaning the welfare of the group and group relationships are a primary value.

Living up to a culture’s values can be difficult. It’s easy to value good health, but it’s hard to quit smoking. Marital monogamy is valued, but many spouses engage in infidelity. Cultural diversity and equal opportunities for all people are valued in the United States, yet the country’s highest political offices have been dominated by white men.

Values often suggest how people should behave, but they don’t accurately reflect how people do behave. Values portray an ideal culture, the standards society would like to embrace and live up to. But ideal culture differs from real culture, the way society actually is, based on what occurs and exists. In an ideal culture, there would be no traffic accidents, murders, poverty, or racial tension. But in real culture, police officers, lawmakers, educators, and social workers constantly strive to prevent or repair those accidents, crimes, and injustices. American teenagers are encouraged to value celibacy. However, the number of unplanned pregnancies among teens reveals that not only is the ideal hard to live up to, but the value alone is not enough to spare teenagers the potential consequences of having sex.

When people go against a society’s values, they are punished. A boy who shoves an elderly woman aside to board the bus first may receive frowns or even a scolding from other passengers. A business manager who drives away customers will likely be fired. Breaking norms and rejecting values can lead to cultural sanctions such as earning a negative label—lazy, no-good bum—or to legal sanctions, such as traffic tickets, fines, or imprisonment.

Values are not static; they vary across time and between groups as people evaluate, debate, and change collective societal beliefs. Values also vary from culture to culture. For example, cultures differ in their values about what kinds of physical closeness are appropriate in public. It’s rare to see two male friends or coworkers holding hands in the United States where that behavior often symbolizes romantic feelings. But in many nations, masculine physical intimacy is considered natural in public. This difference in cultural values came to light when people reacted to photos of former president George W. Bush holding hands with the Crown Prince of Saudi Arabia in 2005. A simple gesture, such as hand-holding, carries great symbolic differences across cultures.

Norms
So far, the examples in this chapter have often described how people are expected to behave in certain situations—for example, when buying food or boarding a bus. These examples describe the visible and invisible rules of conduct through which societies are structured, or what sociologists call norms. Norms define how to behave in accordance with what a society has defined as good, right, and important, and most members of the society adhere to them.

Formal norms are established, written rules. They are behaviors worked out and agreed upon in order to suit and serve the most people. Laws are formal norms, but so are employee manuals, college entrance exam requirements, and “no running” signs at swimming pools. Formal norms are the most specific and clearly stated of the various types of norms, and they are the most strictly enforced. But even formal norms are enforced to varying degrees and are reflected in cultural values.

For example, money is highly valued in the United States, so monetary crimes are punished. It’s against the law to rob a bank, and banks go to great lengths to prevent such crimes. People safeguard valuable possessions and install antitheft devices to protect homes and cars. A less strictly enforced social norm is driving while intoxicated. While it’s against the law to drive drunk, drinking is for the most part an acceptable social behavior. And though there are laws to punish drunk driving, there are few systems in place to prevent the crime. These examples show a range of enforcement in formal norms.

SOCIOLOGICAL RESEARCH
Breaching Experiments
Sociologist Harold Garfinkel (1917–2011) studied people’s customs in order to find out how societal rules and norms not only influenced behavior but also shaped social order. He believed that members of society together create a social order (Weber 2011). His resulting book, Studies in Ethnomethodology, published in 1967, discusses people’s assumptions about the social makeup of their communities.

One of Garfinkel’s research methods was known as a “breaching experiment,” in which the researcher behaves in a socially awkward manner in order to test the sociological concepts of social norms and conformity. The participants are not aware an experiment is in progress. If the breach is successful, however, these “innocent bystanders” will respond in some way. For example, if the experimenter is, say, a man in a business suit, and he skips down the sidewalk or hops on one foot, the passersby are likely to stare at him with surprised expressions on their faces. But the experimenter does not simply “act weird” in public. Rather, the point is to deviate from a specific social norm in a small way, to subtly break some form of social etiquette, and see what happens.

To conduct his ethnomethodology, Garfinkel deliberately imposed strange behaviors on unknowing people. Then he observed their responses. He suspected that odd behaviors would shatter conventional expectations, but he wasn’t sure how. For example, he set up a simple game of tic-tac-toe. One player was asked beforehand to mark Xs and Os not in the boxes but on the lines dividing the spaces instead. The other player, in the dark about the study, was flabbergasted and did not know how to continue. The second player’s reactions of outrage, anger, puzzlement, or other emotions illustrated the existence of cultural norms that constitute social life. These cultural norms play an important role. They let us know how to behave around each other and how to feel comfortable in our community.

For some breaches, the researcher directly engages with innocent bystanders. An experimenter might strike up a conversation in a public bathroom, where it’s common to respect each other’s privacy so fiercely as to ignore other people’s presence. In a grocery store, an experimenter might take a food item out of another person’s grocery cart, saying, “That looks good! I think I’ll try it.” An experimenter might sit down at a table with others in a fast food restaurant or follow someone around a museum and study the same paintings. In those cases, the bystanders are pressured to respond, and their discomfort illustrates how much we depend on social norms. Breaching experiments uncover and explore the many unwritten social rules we live by.

Many folkways are actions we take for granted. People need to act without thinking in order to get seamlessly through daily routines; they can’t stop and analyze every action (Sumner 1906). Those who experience culture shock may find that it subsides as they learn the new culture’s folkways and are able to move through their daily routines more smoothly. Folkways might be small manners, learned by observation and imitated, but they are by no means trivial. Like mores and laws, these norms help people negotiate their daily lives within a given culture.

Symbols and Language
Humans, consciously and subconsciously, are always striving to make sense of their surrounding world. Symbols—such as gestures, signs, objects, signals, and words—help people understand that world. They provide clues to understanding experiences by conveying recognizable meanings that are shared by societies.

A police officer’s badge and uniform are symbols of authority and law enforcement. The sight of an officer in uniform or a squad car triggers reassurance in some citizens, and annoyance, fear, or anger in others.

It’s easy to take symbols for granted. Few people challenge or even think about stick figure signs on the doors of public bathrooms. But those figures are more than just symbols that tell men and women which bathrooms to use. They also uphold the value, in the United States, that public restrooms should be gender exclusive. Even though stalls are relatively private, most places don’t offer unisex bathrooms.